I read this as "Anatomy of a Tantrum" (subtitle) "Induced Meltdown," as if she'd provoked the behavior in question in order to study it, which seemed to me like a great way of preventing future recurrences. She's actually talking about a type of meltdown, namely a tantrum-induced one. I found both ideas helpful.

With Raccoon, my three warning signs are whining (what I heard another parent call the whine-fuss-flop), fixating, and escalating frustration. In full-blown meltdown, he is not able to receive assistance, be soothed, nor be distracted from his goal. But I've never actually mapped out the path he takes and where the point of no return is. I feel like this is something basic that I should have figured out long ago but have overlooked until just now.

What I would really like to know how to fix/avoid/solve/derail/overcome/improve or change are the "nothing is right" moments (can be hours, days, weeks...) These are the times that no matter how hard I try, nothing feels, tastes, smells, or looks right. Even if I follow his specifications exactly, or do something the way we've always done it, it's "not right." These are the days that eating and clothing are particularly challenging. Today was one of those days.

Despite that, I did have a moment of triumph today. Introducing new things on a "nothing is right" day will lead to rejection and failure for all involved, no matter how appealing the original idea or intention. Everything is too much. A Goldilocks day. My father however, is new to all of this and spent the afternoon happily building Raccoon another tree swing (attempt number two after yesterday's epic failure - the swing had pitch on it, was too wobbly, etc. etc. etc. So Grampa took it down, then the wailing started "I want to swing!"). Raccoon loves to swing. My dad knows this and wanted to surprise Raccoon. He really is a good Grampa. Undaunted, today he once again told Raccoon to come see the swing.

I can already see it starting, the whine-fuss-flop just like yesterday. Second verse, same as the first, a little bit louder and a little bit worse. But today I whisked him away, told him matter-of-factly that the swing was too dangerous, and I was not going to allow him to use it. I could see him perk up: ah, a challenge. My son loves nothing better. "I'll be careful, Mama," he protested, "I want to swing." So we negotiated a deal - he could swing as long as he didn't whine.

And swing he did. It took him quite a bit of effort. He slid off the board seat few times, but he got back on. "Look, Mama, I'm practicing!" may just be the most heartwarming words I've ever heard. 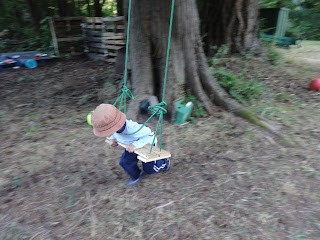