When we came back for our 3rd term as missionaries in 2014, I bought a bunch of fruit trees, plopped them in the ground with a bit of fertilizer in the small hole, and thought that was that. Three years later, we have seen a few skinny fruits, but mostly we are still waiting. My friend in the neighborhood says I need more fertilizer, so I am now indebted one banana bread to another neighbor for two sacks of guinea pig poo.

The other complication is that it hails several times each October, right after the September rains when everything is in flower. This severely limits how many flowers survive to become fruit. In the Bible, it talks about giving the firstfruits to the Lord, but mine were so sickly that I felt bad giving them away. Here's to a better crop next year! 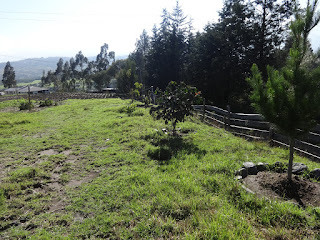 This is my pine tree and beyond a guaba tree.