Where I live, there are no public libraries where you can check out books, so Raccoon and I have an account at my old school's library. Being a K-12 school, it has a very nice children's section along with an extensive high school/adult section as well. But because it belongs to a school, this also means that it is closed over the summer.

Today, Raccoon and I returned for the first time in several months, and I was amazed to see how much he has grown over the summer. He could get on the swings by himself, confidently climb up the ladder and go down the slide, and he was much more independent. Sometimes it's hard to see the changes day in and day out, but it was so clear to me today how far he's come.

Dear Friends, Family, and the World

My son has some special needs. Yes, I know. Yes, we're working on it.
There are some things you can do to help. Please:

1) Stop touching him.
2) Stop TOUCHING him.
3) STOP TOUCHING HIM!   (Ahem.)
4) Stop getting in his face.
5) Stop talking to him in a loud, baby voice.
6) Stop talking about him and "his problems" like he doesn't understand you.
7) Stop staring. Accept him. He is amazing and unique and worth getting to know on his terms.
8) Follow his lead. If he does come up to you or get close to you, pay attention quietly and calmly.
9) If he talks, listen. Show some interest.
10) When you read all of this, trust me, I'm not making it up. Believe me.

If you do these things, we'll handle the rest.
Thank you,
Raccoon's Mom


If I wore a sandwich sign, this is what it would say. Yesterday, someone we visit semi-frequently said that Raccoon has a serious character flaw because every time she sees him, he is angry. I tried to explain to her how she could improve her relationship with him, but I could tell I wasn't getting through. Perhaps if I put it in writing...

Raccoon has officially entered the "I wonder if this toy will this fit in my nose" phase. In ten minutes with my husband, he licked deodorant and stuck a plastic flower up his nose. The other day it was play-doh up the nose and cotton swabs in his ears.

We only have three rules at our house:

But now we have found it necessary to add a fourth:

I am hoping that this particular phase passes quickly and painlessly.

A friend of mine mentioned this blog post on facebook about some special children in Bulgaria who need families. When I began to read, I was taken back six years ago to when I first met my daughter, SB. Her story was similar to Harvey's and Thad's (feeding tube, severe abuse from her birth family), although she was in an orphanage where the care was much, much better. But still, she was small, fragile, and so lost. The year and a half that followed was the best and worst time of my life. I saw the glory of God, and yet also descended to the darkest depths.

Seeing those children and reading Adeye's stories tonight, it hit me. Shocked me. I suddenly realized - I would do it all again. If my husband is willing, perhaps there is another child with special needs out there who will someday be part of our family. Not because I am anything special, but because God has shown His love and grace to me. Few seek out the broken, except for God. In reaching out, I can show the world a little of what He's done for me.

Adeye wrote about a little boy they are adopting, "I realized once again that redemption never comes too late for precious ones such as these. To the world, this little boy was written off completely."

My SB was a "lost cause," severely brain damaged, blind, difficult to feed, and she rarely slept. Our pediatrician in the U.S. recommended that we return her to the orphanage because life with her was so challenging. She only had a year with us before she died, but she experienced love, imperfect as we were, and she went from this: 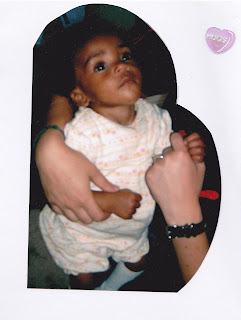 to this in a few short months. 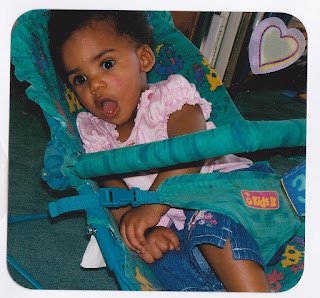 I hope and pray that each one of those little ones gets a forever family, soon.

Everything looked great on my 20 week ultrasound. The technician thinks the baby is a girl, but she wasn't sure, so I have another ultrasound in 6 weeks. With Raccoon, I waited until 21 weeks and there was no doubt about him being a boy. This baby was moving around too much and her (?) bottom was up by my ribs so the technician couldn't get a good look. But the most important thing is that everything is okay. I'm halfway through my pregnancy, it's hard to believe.
Posted by R.A.Gudino at 10:34 AM 1 comment:

Email ThisBlogThis!Share to TwitterShare to FacebookShare to Pinterest
Labels: baby

Three days to go until I have my mid-pregnancy ultrasound. I'm very excited to find out whether number #2 is a boy or girl. With Raccoon, I felt an unshakeable certainty from the beginning that he was a boy, but with this pregnancy I've waffled back and forth. Raccoon says he wants a brother, and my husband would like another boy too, so we'll see. I'm fine either way, I just want to KNOW!!! I'm not good at waiting... I've been counting down to my ultrasound for a month. Monday is the big day and I probably won't have much to write until then because all I have right now is baby on the brain. I'm just praying that the little one will give us a clear view!
Posted by R.A.Gudino at 11:19 AM No comments:

Email ThisBlogThis!Share to TwitterShare to FacebookShare to Pinterest
Labels: baby 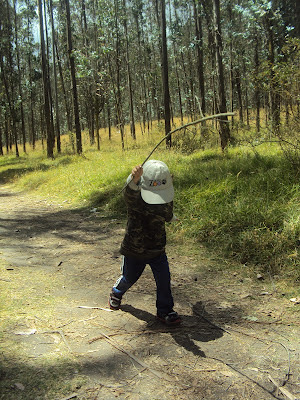 This pretty much sums up Raccoon's philosophy of life at 35 months.
Posted by R.A.Gudino at 4:42 PM No comments:

Email ThisBlogThis!Share to TwitterShare to FacebookShare to Pinterest
Labels: family

For a time, I saw references to this post, I don't want to raise a good child, all around the internet. One of my favorites was this commentary by another mom of a spirited child, and she called her son a "fountain dancing child." Yup, I definitely have one of those. Three years later we have given up embraced it, and try to let him live out his own particular rhythm with our blessing. 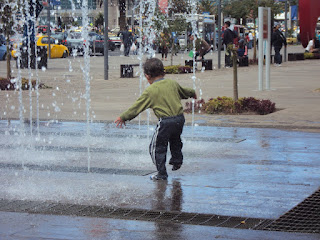 Beach on the Brain

I live in a place where the seasons don't really change much. Sometimes our weather is described as "eternal springtime," but right now it's warm and windy, so I think it seems more like summer. Most of the local schools started today, and our neighborhood was unusually quiet after the busy summer. I am glad that Raccoon still has at least a year, maybe two, before I'll be joining the September craziness.

Instead, I spent the day dreaming of the beach. This is where we went last August for Raccoon's first experience with the ocean... 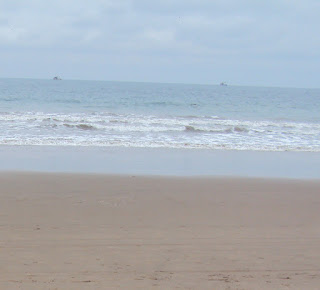 One of the advantages of year-round nice weather is that we can do a beach trip anytime. Sometimes the air is a little cool, but living on the equator means our ocean water is quite warm (sorry if you're jealous and yes, I'm thankful!). September and October are quite busy for my husband, but maybe in November. Hmmm....
Posted by R.A.Gudino at 6:43 PM No comments: